The Hawaiian Islands is also home to numerous haunted places with many a Hawaiian ghost story to tell! Many believe they’re the most haunted islands in the world!

The following are nine of the most haunted places in Hawaii:

Our first stop in telling these Hawaii ghost stories leads us to Pearl Harbour. Pearl Harbor Naval Station suffered devastating losses on December 7, 1941, when Japan attacked. Thousands of people lost their lives or were wounded during the attack.

Japan also attacked Hickam Air Force Base, which sits next to Pearl Harbor. Since the devastating attack, countless visitors to Pearl Harbor have stated they have experienced different hauntings.

One of the biggest things that people visiting the area claim is a feeling of tremendous sadness, extreme pain, as well as feeling incredibly frightened for no apparent reason.

Another area believed to be haunted is the USS Arizona. People state they have seen the apparitions of soldiers on the dock of the sunken vessel.

The ghost of another soldier is believed to wander the deck of the USS Arizona when the tide is low.

The Garden originally started out as a park in the 1920s. In 1957, it officially opened as a botanical garden. Local legend has it that areas of the Wahiawa Botanical Garden are haunted by the Green Lady.

Descriptions of the Green Lady vary. Some people claim she is covered in gross and green mold. Others claim she has jagged teeth, hair covered in seaweed, and fish-like scales that are green.

There is one legend that if you cross a certain bridge by yourself in the botanical garden you will never return. The Green Lady is also said to have been seen at a local elementary school.

Setting sights on the Green Lady is definitely one of the up there with scariest of the scary Hawaiian legends we’ve come across!

In 1927 the Honolulu Airport opened. Thousands of people a day travel to or out of Oahu’s main airport.

Based on Honolulu ghost stories told by locals on the island there is one individual who does not leave the airport. A blonde woman in a white dress, known as the Lady in Waiting, has been spotted in different areas of the airport, including at the gate.

The story states she had fallen in love with a man who had intended to marry her. When he left on a flight and never came back the Lady in Waiting was devastated so she took her own life.

Other paranormal witnesses have seen other unusual sights such as a ghost on the Wiki-Wiki shuttle and toilets flushing on their own.

People have also experienced the sensation of someone sitting on their chest causing them to choke. The entity that causes this is called the choking ghost.

Number 6 in our rundown of scary stories of Hawaii leads us to the historic, Lao Theatre in Wailuku. The Iao Theatre first opened back in 1928.

Over the years it has been home to countless plays and other events. The Iao theatre is also believed to be home to a considerable amount of paranormal activities.

Staff members and patrons of the theatre have claimed to experience an assortment of unusual activity. Some witnesses claim a friendly female ghost wanders around the stage as well as sitting in different seats in the theatre.

Ghosts of Hawaiian soldiers have reportedly been spotted in the basement. Other activity reported includes shadowy figures in the theatre’s lower levels, cold spots, and people hearing voices.

The Hilton Hawaiian Village is located on 22 acres of pristine beachfront property on the island of Oahu. The resort offers its guests with much more than easy access to the beach; it also affords guests with rooms in the largest hotel in the Hilton chain. Guests also get to enjoy over 90 boutiques and shops, numerous restaurants that serve a broad range of international cuisine, as well as the largest pool on the island. Guests can also pamper themselves at Waikiki’s largest spa.

Guests to the Hilton Hawaiian Village also have the opportunity to experience some paranormal activity. On legend states that back in 1959 a hotel employee watched a young woman vanish right before his eyes. There are claims someone murdered the young woman in her room at the hotel. Other sightings by guests and hotel staff include that of a beautiful woman in a red dress. People have seen her roaming the hotel’s halls while other people claim to have seen her on the beach. There are claims the woman in red is Madam Pele, the volcano goddess.

Highway 1 is another one of the most haunted places in Hawaii that are located on the island of Oahu. Highway 1 is a roadway that passes through the Koolau Mountains.

History states that many ancient warriors perished in those mountains. Construction on the Highway took much longer than expected. It took roughly seven years until completed.

One of the reasons that construction took so many years is that countless workers who claimed to see ghosts would either leave work the same day or would never return.

During the process of building Highway 1, the bones of the ancient warriors were excavated. The moving of the bones is said to have disturbed the warriors’ final resting place, thus the many sightings of ghosts.

One of the most infamous of all supposed true Hawaiian ghost stories comes from the Nu’uanu Pail Highway. The Nu’uanu Pali Highway is the main highway on the island of Oahu.

It connects the windward side of the island with downtown Honolulu. Construction on the original road started back in 1845. Over the years the Pali highway has been further developed.

Along the breathtaking Pali Highway developers created the Nu’uanu Pali Tunnels. According to legend different areas along the Nu’uanu, Pali Highway are haunted. At the Pali Lookout, people have seen Hawaiian soldiers being tossed off the cliff as well as a ghost in white.

It is also believed if you try to transport pork across the Pali Highway first your car will stop and then an old woman with a dog makes her presence known.

In order to get passed that section of the Pali Highway the old woman’s dog must be fed the pork.

In September of 1938 construction of Hickam Air Force Base completed making the base ready for use. The following year construction on the main barracks started. In 1940 the base had everything the military person could need.

They barracks had everything from squadron dayrooms, a mess hall, a medical dispensary, laundry facilities, barbershops and other creature comforts the soldiers on the base could desire.

The soldiers enjoyed their home away from home so much they gave the barracks the nickname the “Hickam Hotel.” When the Japanese attacked Pearl Harbor on December 7th, Hickam Air Force Base suffered a tremendous amount of damage.

Since December 7th, a number of unusual incidents and accidents have occurred at Hickam Air Force Base. On incident occurred in 1955 when an R6D-1 was attempting to land during a heavy rainstorm in the dark. The R6D-1 crashed and more than sixty people perished.

Additional reports claim that World War II sailors in their fatigues wander around different areas of the base. Another claim is that there is a ghost on the base that likes to play pranks on people.

The ghost, named Charley, apparently likes to throw objects and switch radio stations. Witnesses also claim that a guard shack on the base is haunted.

Witnesses claim to have seen the ghost of a soldier in his uniform at the shack at night. The soldier had apparently been killed while on duty in the shack.

The facility not only provides a place for an individual awaiting trial but it also offers numerous other services and programs for the detainees. Prisoners can get help with parenting skills, substance abuse, and domestic violence issues.

The facility also offers a work furlough program, jobs in the laundry facility and the kitchen. Long before the facility became what it is today it was the Oahu Prison. From 1909 to 1944 47 men were hung at the prison.

Where the gallows once stood there are now offices. There are prisoners that have been in the facility who have made claims of cell doors that rattle.

Guards who have attempted to sleep in the squad room of the present day facility claim something about the room makes it very difficult to sleep. 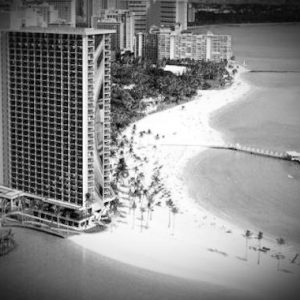 View All Haunted Hotels in Hawaii