Iowa is located in the Midwestern United States. Iowa is a state that is very important to the U.S. because of its agricultural output. Most importantly it is a state well known for its corn production.

Iowa is also known for its rolling hills, lakes, savannas, and tallgrass prairies. Iowa is also home to a number of historical locations known to be haunted.

Let’s take a closer look at 8 of the most haunted places in Iowa:

When in Burlington, Iowa, if you venture about eight miles north near the Mississippi River you may find yourself on Stony Hollow Road.

Stony Hollow Road is not a happy place if you know of the legend of Lucinda. According to stories, Lucinda had gone to meet the man she was secretly engaged to unfortunately he never showed.

So distraught over him not showing, some say because he ran off with another woman while others say his horse buggy got stuck in the mud, Lucinda killed herself.

Instead of moving forward the jumped off the edge of a cliff only to meet her end on Stony Hollow Road. People driving on the road claim to see Lucinda’s ghost walking around.

Legend claims that if you go to where Lucinda jumped to her death at the bluffs at night and utter her name three times, she may appear.

If and when she appears she drops a rose at your feet, there is a belief you will perish the very next day.

In its 100 year history the theatre has been home to an unknown number of actors and performers. The building has served as a location for live performances as well as modern motion pictures.

People have witnessed what appeared to be the ghosts of vaudeville performers on the stage. Another lone ghost sits in the theatre when it is dark only to vanish when anyone tries to approach it.

The basement is home to additional unknown entities. People have also stated issues with electrical disturbances, odd sounds and voices when the theatre is empty.

Tara, or Terror, Bridge has a history that dates back to the 1800s. At one time the bridge was not far from the town of Tara.

The bridge was built to allow traffic of all varieties to cross over railroad tracks.  There are multiple stories associated with the bridge.

Some say a frustrated farmer’s ghost haunts the area. It is believed he died after cursing the winds.

Other stories claim someone, or something, lives beneath the bridge. The scariest and most heartbreaking of the stories associated with the bridge involves a woman and her three children.

According to legend, the woman took her kids to the bridge to see the train.

Sadly, she threw the kids onto the tracks one at a time and they were killed by the train. The mother then committed suicide by jumping off the bridge.

Claims have been made that if you drive on the bridge do not stop and make sure all of your doors and windows are closed and locked.

If you do not abide by this warning the ghost of the mother will throw you to your death.

Most places that are haunted tend to fall into the creepy category. If you want to visit someplace that is haunted that offers you more of a chuckle and a smile than fear, the Rainbow Bridge in Lake City, Iowa is the spot for you.

People claim this bridge is haunted by a ghost. This particular ghost apparently has a tremendous appreciation for chocolate.

According to stories if you leave an unopened chocolate bar, or candy bar, in the center of the bridge and leave something unusual will happen.

The contents of the candy bar will be gone, but the wrapper will still be completely intact and unopened.

Iowa State University was first founded back in 1858 under the name Iowa State College of Agriculture and Mechanic Arts.

It later became Iowa State University, or ISU. ISU is well known for being a great school for science, engineering, and agriculture. ISU also has a history of hauntings.

One ghost that people have encountered is believed to be Frederica Shattuck.

Shattuck was a major contributor to the University’s theater department when she was alive. Her spirit has haunted both the Shattuck Theater and then the newly built Fisher Theater.

Students at the University claim to have seen Shattuck’s wheelchair move on its own as well as hearing disembodied voices.

Another ghost at ISU is Hortense Elizabeth Wind. She was a former Red Cross nurse during World War I who haunts Gold Star Hall.

Two sisters are believed to haunt the Farm House Museum.

In Iowa City, Iowa the Oakland Cemetery was established back in 1843. Within the cemetery stands a bronze statue of an angel.

Some believe the statue, which commemorates Eddie and Nicholas Feldervert, has changed colors because the artist who created it, Teresa Feldervert enjoyed the dark arts.

Other legends state that anyone who kisses or touches the angel will die immediately. Others claim any contact with the statue, even walking beneath it, will result in a horrible fate or loss.

One popular story states a young man went insane and was eventually found dead after trying to remove one of the angel’s hands. 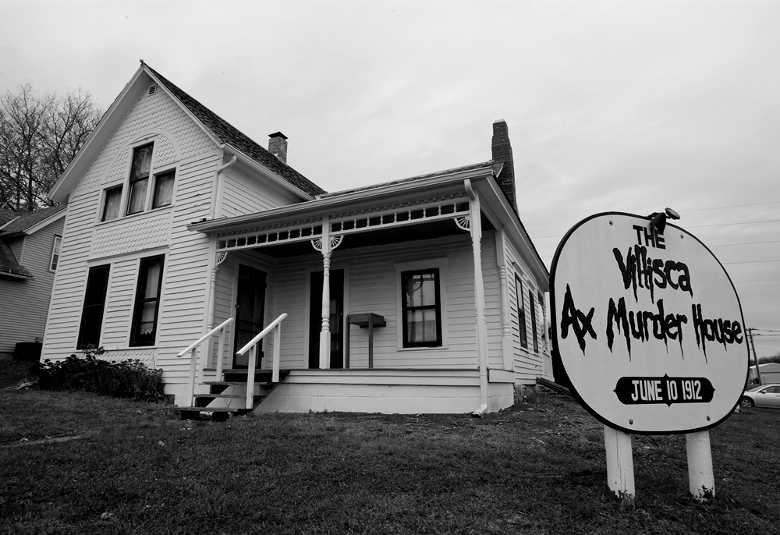 Up until June 9, 1912, Villisca, Iowa was an ordinary town. On that night a horrible crime was committed at what is now infamously known as the Villisca Ax Murder House.

While sleeping in their beds the Moore family, Josiah and Sarah Moore, their children Herman, Katherine, Boyd, and Paul, as well as Lena and Ina Stillinger, friends of the children, were murdered.

Someone came in and killed them with an ax. The bodies were discovered the following morning when a concerned neighbor contacted Ross Moore, Josiah’s brother.

Along with all of the bodies, the murder weapon, an ax, was found in the same room as the two Stillinger girls.

There was a trial for George Kelly, a traveling preacher, but he was found innocent of committing the crime. To this day no one knows who committed the horrific crime.

After being empty for quite some time the house was purchased and the doors were opened to people interested in seeing the famous home where the murders took place.

Over the years hundreds of people who have gone to the house have experienced an assortment of paranormal activity.  There are some people who say while in the house there is an overall feeling of an evil presence.

Others have seen unusual green lights as well as blood stains vanishing from the walls. Some people have claimed to have been pulled or pushed by hands that are not there.

People have also heard voices which many believe belong to the children killed in the home.

There have even been recordings of these voices on multiple occasions.

Back in the late 1800s Iowa had one asylum, Mount Pleasant State Hospital. Due to overcrowding, Stephen Vaughn Shipman designed a new facility built in 1873.

That facility was meant to house drug addicts, alcoholics, the mentally ill, the elderly, and the criminally insane.  The facility took 10 years to build.

Today the hospital is Independence State Mental Hospital.  It serves as not only a place for drug and alcohol rehabilitation programs, but it is also a psychiatric hospital and a training school for those wanting to become nurses.

Early on in the mental hospital’s history patients were subjected to some rather unpleasant treatments. In certain areas patients underwent electric shock therapy while others underwent lobotomies.

It is unclear what other inhumane practices the doctors and other members of the staff used to treat and control the patients.

People who have worked at Independence State Mental Hospital have claimed there are certain parts of the institution they will not enter due to reports of paranormal activity.

Some of the paranormal reports at this mental hospital include the feeling of being watched by someone or something. Other people have reported hear screaming voices and whispering.

There are also cold drafts and shadows appearing in empty hallways. People have also claimed to see the ghosts of former staff members and patients. Paranormal investigators flock to the mental hospital in hopes of experiencing and recording paranormal activity.

Although Independence State Mental Hospital remains a fully operational institution it is quite apparent some of the former patients have never left. 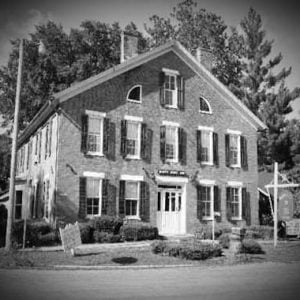