North Dakota probably is not the first state most people think of when it comes to paranormal activity. The American heartlands just seem too wholesome for all that, but don’t let the Prairie State fool you! There are more than enough haunted houses and gruesome ghouls to go around!

Let’s take a look at some of the most haunted places in North Dakota:

The Children’s Museum at Yunker Farm is an interactive museum housed in a brick farmhouse that dates back to 1976. It is believed to be haunted by the ghost of Elizabeth Yunker who has been seen hanging around upstairs close to where most of the children’s activities happen.

There have also been reports of a young child who stands by a well. This is believed to be the ghost of a child who died in that same well many years ago.

Staff also report that the elevator has a habit of working all on its own!

It may seem like the unlikeliest place to find a ghost, but believe it or not one of the most haunted locations in North Dakota is Medora Fudge and Ice Cream Depot!

There is just the one ghost inside and she only appears once a year on her birthday!

However, all year round there are unnatural cold spots and strange noises, she just doesn’t manifest apart from on her birthday.

Many of the employees say that there is ghostly activity in many of the different areas around the hospital. For example, the elevator down to the morgue is often seen operating all by itself!

Speaking of the morgue, the doors also open by themselves on occasion which is made all the more creepy by the fact that they have to be opened from inside the morgue unless you have an access key!

Disembodied voices are fairly common in the cafeteria and there are lots of running footsteps in the basement, but upon investigation, there is nobody there!

One of the rooms on the third floor seems to have a ghostly patient that has never left as on nights when that room is unoccupied, the nurse’s call button is often pressed!

There are two different parts of North Dakota State University that are reported to be haunted. The first one of these is Ceres Hall, in particular the third floor of the building. It is generally accepted that this can be traced back to a man who hung himself from one of the heating pipes during World War II.

Several strange occurrences have happened on the third floor, but students do not feel particularly uncomfortable up there. However, the same cannot be said for the basement which houses a much darker, and some say evil entity.

Entering the basement triggers a strong fight or flight instinct in most people and everyone is in a hurry to leave the area. Few have stayed long enough to report what happens to those who do not flee!

Not to be outdone, Minard Hall at the university also boasts plenty of paranormal activity and a very creepy history! In the 1920s, the fourth floor attic of Minard Hall was a dance room.

One morning, a janitor entered the room and found two people dead. Nobody knows what happened to them, but it was assumed to be a double homicide, which was never solved. The dance room was closed and later it was converted into a zoology lab.

Thanks to increasingly unstable floorboards, the entire fourth floor was closed off permanently in the 1960s. Of course, where there are gruesome tales, students will break in and several have managed to sneak up to the attic!

All of them have returned with tales of a strange presence and feelings that they were definitely not alone!

Harvey Public Library was built where The Bentz residence once stood. Why is this significant you might ask? Well, because this could very well explain why the library is one of the most haunted places in North Dakota.

In 1931, Sophia Eberlein-Bentz was bludgeoned to death as she slept by her own husband. He was arrested and convicted of the murder after Sophia’s daughter found blood in the bedroom.

The library staff began to move into the new building on the 59th anniversary of Sophia’s funeral and unexplained activity began to happen almost immediately.

The librarian’s office is said to be a particular focal point and it can surely by no coincidence that the office sits more or less where Sophia would have died!

The Totten Trail Historic Inn once serves as living quarters for officers and their families in the latter part of the nineteenth century.

Witnesses say that they have seen a number of ghosts in the inn and that some have even followed them around the building!

It is believed that these apparitions could be a man and woman who passed away just before some major renovation work took place at the inn.

It is without a doubt one of the most haunted buildings in North Dakota.

Most people know the story of General Custer and the Battle of Little Big Horn, but the lesser known story revolves around his beloved wife and the home they built together in Mandan.

The couple never really had much chance to enjoy their new home since Custer died at Little Big Horn in 1876 and this certainly upset his wife. She is said to haunt the home to this day, always looking for her husband.

Lights frequently flicker on and off, doors open and close and visitors hear disembodied voices.

Mrs Custer’s apparition has also been seen and she is always in her black mourning dress.

Witnesses have seen mannequins moving on their own inside the building, which was constructed back in 1915.

There are also regular reports from staff and visitors alike of ghostly whispering when nobody else is around.

The Chateau De Mores was once home to the Marquis De Mores and his wife Medora, after whom the city is named.

These days those who go to visit say that they are certainly not alone when they enter!

Visitors often feel cold spots and the lights are known to flicker on and off with some degree of regularity.

It is believed that this is the work of Medora De Mores who died while traveling and never got to return home. Has she found her way back in spirit?

It is said that the Liberty Memorial Building in Bismarck was once haunted by a ghost who is affectionately known as the ‘Stack Monster’!

However, there have been no reports of his presence since 1981 when The Historical Society moved out of the building to a new heritage center.

In fact, one employee believes that she might even have seen him leave as she watched the main door open and close by itself just before the big move happened!

With that being said, the building is happy to welcome him back at any time even going so far as to issue a security badge just for him which sits at the main desk!

During the time that he was allegedly haunting the building there was a variety of unexplained activity including footsteps, shadows and disembodied voices.

San Haven Sanatorium was opened in 1912 in order to treat those suffering from tuberculosis. There were also developmentally disabled patients admitted to the hospital right up until the 1980s when it was closed down on the back of financial difficulty.

In its heyday, the hospital would have housed as many as 900 patients and reports suggest that the conditions were not all that they should have been – which is probably being a little too generous!

It is thought that between the hospital opening in 1912 and closing in 1989, as many as 1000 patients passed away there.

However, the death count does not stop there! In 2001, a 17 year old boy apparently fell to his death while exploring the abandoned property.

Locals all agree that San Haven Sanatorium is one of the most haunted locations in North Dakota, but actual specifics are hard to come by.

From some of the reports, a baby can be heard crying inside, faces can be seen looking out of the windows, dark shadows can be seen wandering the empty rooms, and sightings of orbs and apparitions are aplenty! 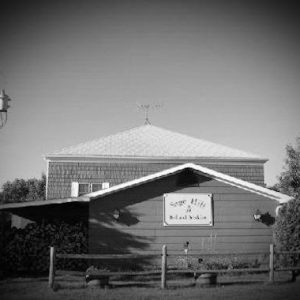