If there is one thing that Salem, MA will always be well known for then surely it has to be the witch hunts of 1692. There were so many women tried and executed as witches during this time that it is no surprise at all that the town is haunted.

However, it is not just the souls of alleged witches that linger here, there are plenty of other spooks too all with their own stories to tell.

Join us as we explore some of the most haunted places in Salem MA. 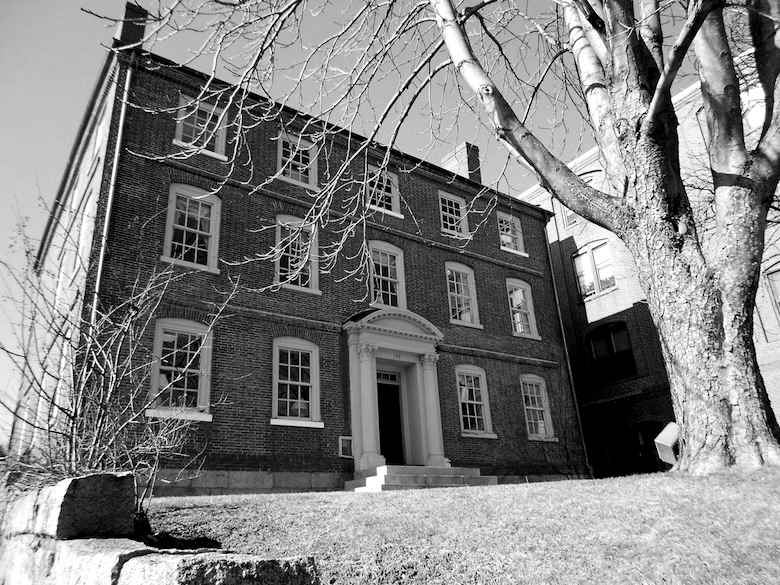 The Joshua Ward house was built back in 1784, but is said to be haunted of the spirits of both Sheriff George ‘The Strangler’ Corwin and Giles Cory. Although the house was built after the Salem Witch Trials, both of these men were heavily involved with the witch trials.

The house is built on land that was once owned by the Sheriff who was known as a sick and sadistic man who used unusually cruel methods to interrogate suspected witches. He died in 1697 and was actually buried in what is now the basement of the Joshua Ward House! His body was moved to Broad Street Cemetery, but his spirit has lingered here and is blamed for choking visitors.

Giles Corey was one of the men that Sheriff Corwin tortured and killed for being a warlock. His spirit is often blamed for pulling things off of shelves and knocking trash cans over! There are also reports of a third spirit, a female who may also have been one of the accused witches killed by Corwin.

A&B Salem is known for serving up their signature slammer burgers and beer, but they also come with a side of paranormal activity!

Co-owner Amy Butler states that when they were getting the restaurant ready to open, they never felt like they were actually alone here and spent a great deal of time looking over their shoulders!

Since opening, staff and customers alike have experienced cold spots in the building and a few apparitions have been spotted.

The haunting can probably be explained by the fact that back in the day, the building actually served as a jail! In fact, one of the most commonly spotted apparitions happens to be a prison guard who stands in one corner holding a clipboard. 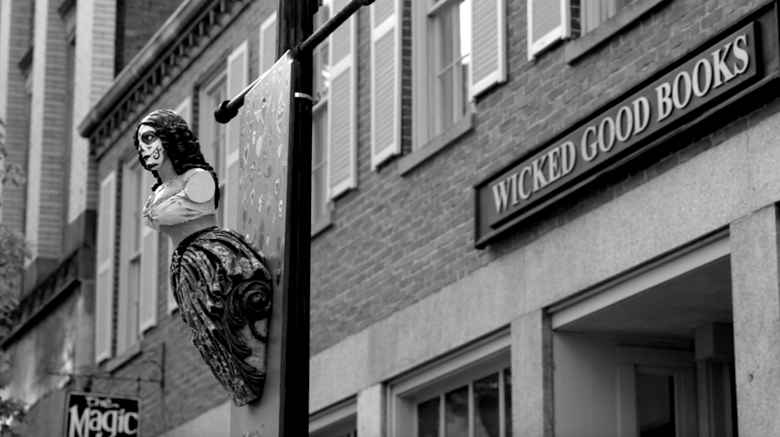 Wicked Good Books is well known as being Salem’s haunted bookstore. There have been many reports from witnesses who have seen books mysteriously flying from the shelves as if they had been flung by unseen hands.

When the current owner was renovating the shop, she invited paranormal investigators to check it out after construction workers uncovered some secret tunnels underneath the shop! They also found evidence of desecrated human remains in the tunnels which could go a long way towards explaining the presence of these disgruntled spirits!

As we have mentioned, Salem is most famous for the witch trials, but once the hysteria had died down, it was the local taverns in town that became a focus for illicit activity!

It is said that sea captains docking their ships at Derby Wharf would come ashore and kidnap young men from the bars and brothels, then use the tunnels to drag them back to the ships without attracting too much attention.

It is because of this that the entire area is said to be haunted, but the In a Pig’s Eye restaurant is said to be a particular focal point for the paranormal activity.

Among the reports there have been sightings of ghostly pirates in the bar area, disembodied voices believed to belong to sea Captains and even screams and sounds of struggling drifting up from the underground tunnels. 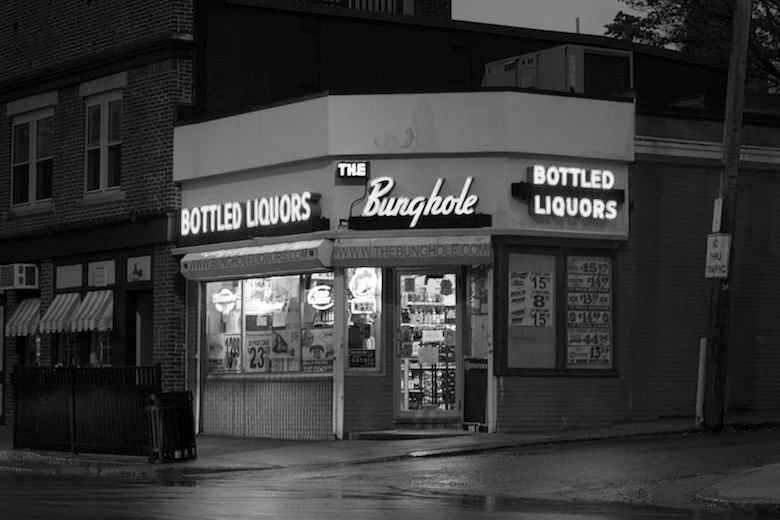 It is always great when we come across haunted locations that take everyone by surprise and in Salem that place is Bunghole Liquors which has more than one kind of spirit in store for customers!

Once you learn that the building previously served as a funeral home it starts to make a little bit more sense that the place is haunted! There is actually a very interesting history here.

Although publicly it was a funeral home, during the Prohibition era the basement was used as a speakeasy! The locals would gather among the old embalming equipment downstairs and indulge in illegal booze and even a spot of gambling!

These days the liquor store is haunted by two ghosts, a female spirit that is often seen browsing the wine racks and a ghostly black cat that pops up in various corners now and then! 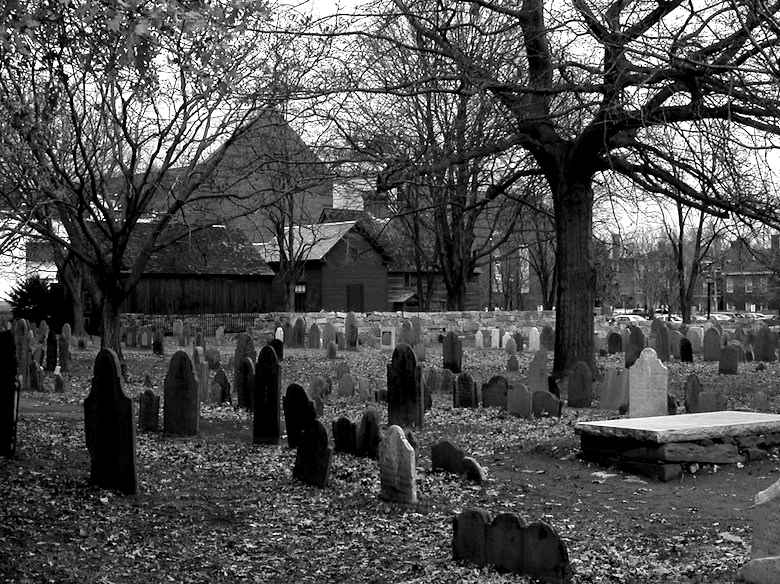 The Old Burying Point Cemetery is also known as Charter Street Cemetery and it is home to more than its fair share of spooks and specters. There are rows upon rows of headstones here, some of them have been damaged over the years and many have become too worn to make out the names and inscriptions.

However, one of the people that are known to have been laid to rest here is Judge Hathorne, known locally as ‘The Hanging Judge’ due to his role in the Salem Witch Trials. His spirit along with others buried here is said to be captured on film occasionally if people stop by after dark to photograph the old graves.

Some of the residents of houses around the cemetery also claim that the spirits will sometimes stray into their homes as well!

Murphy’s sits at the back corner of The Old Burying Point Cemetery in Salem. This is one of the reasons that the bar and restaurant are supposedly haunted. A number of people, both customers, and staff, claim to have seen a Victorian lady in a powder blue dress accompanied by a boy and a picnic basket!

Murphy’s was previously called Roosevelt’s and the owner at the time also had his own experience with this female apparition. He apparently came face to face with her when he was working alone in the bar after closing time.

There are also records to show that a small coffin, believed to have been a child once broke through the wall of the restaurant suggesting that perhaps some graves were built over when the property was constructed. This could very well be why the place is now haunted. 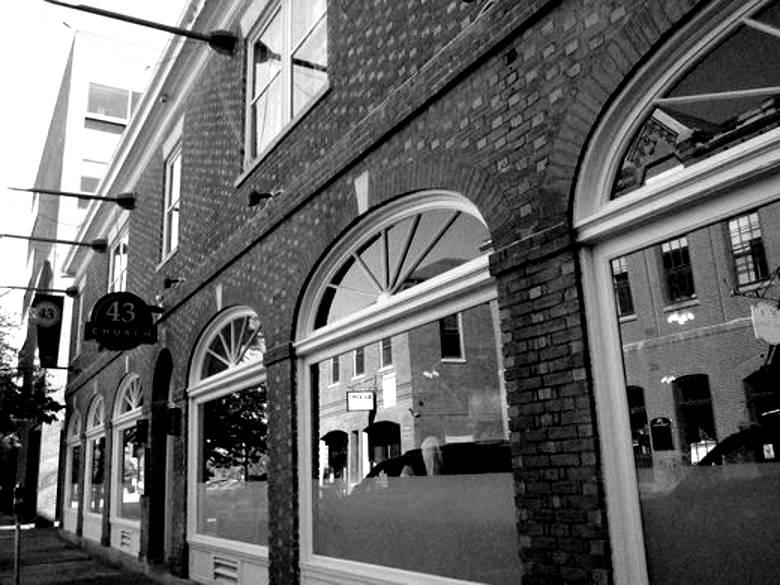 Although it is now known as Turner’s Seafood, most people remember this particular Salem building as The Lyceum. The property is apparently haunted by a lady in a long, white period style dress and she is most often seen on the staircase.

The building in fact, sits on the land that was once an orchard owned by Bridget Bishop – one of the first women executed for witchcraft – many believe that it is Bridget who is the lady in white.

There are also said to be a few other spirits hanging around and there have been reports of apparitions, light anomalies, and electrical malfunctions. 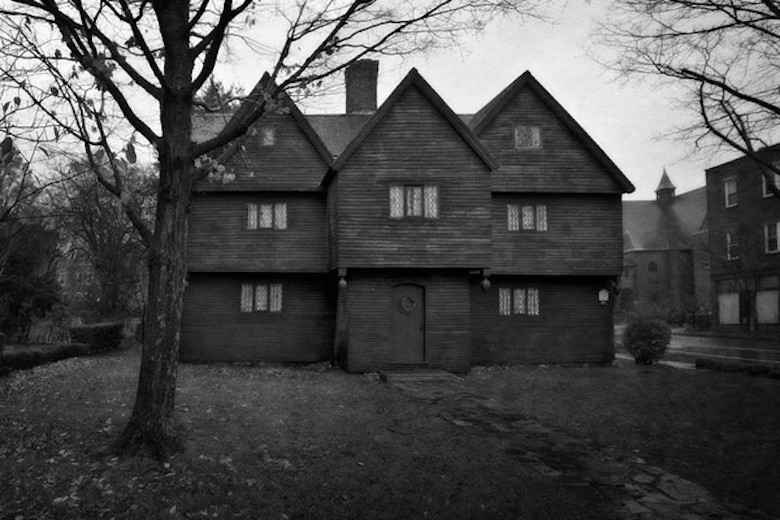 The Witch House or the Jonathon Corwin House as it is also known as the home of Judge Jonathan Corwin who was a key player in the Salem Witch Trials. In fact, this house is actually the only building in Salem still standing that has ties to the 1962 Witch Trials.

Corwin was the one charged with investigating claims of witchcraft. He was responsible for condemning 19 people to their deaths.

His house is now a seasonal museum open to the public and is considered to be one of the most haunted places in Salem MA.

The paranormal activity reported here includes but isn’t limited to; cold spots, people being touched and the disembodied voice of a little child. 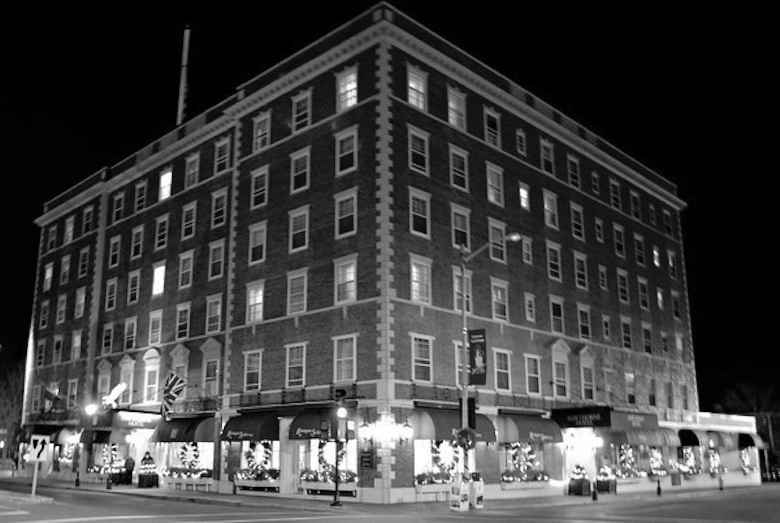 Guests of the Hawthorne Hotel often report seeing a female apparition walking up and down the hall outside and pausing at the door of the room. Those staying in the room have said that they feel uneasy in the room as if they are not alone there.

Room number 325 is also said to be haunted and guests often experience the lights and faucets turning on and off by themselves. Some guests have also heard the sound of a crying baby and feeling like they have been touched.

Staff have also reported seeing the ship’s wheel in the hotel restaurant being moved by unseen hands! 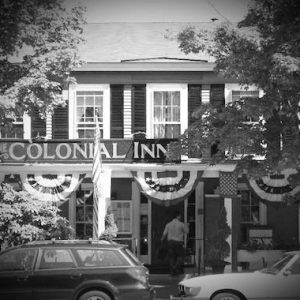 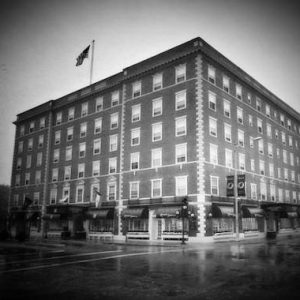