Georgia is well known for being packed full of some of the creepiest places in the entire world. There is so much history at every turn that is really comes as no surprise that there are so many haunted buildings here. Savannah in particular is known to be one of the spookiest cities in the United States, if not the world.

Read on to learn more about some of the most haunted places in Georgia:

One of the most haunted places in Georgia is the Moon River Brewing Company. The famous microbrewery once served as the first guest house in Savannah – City Hotel.

The hotel opened back in 1821 and it was the scene of a wide variety of very unsavoury behaviour including, but not limited to violence, brawls, beatings and even shootings. This probably explains why the building now houses so many aggressive spirits who have been known to push patrons and even cut in line at the bar!

The basement is said to house a spirit who the staff have dubbed ‘Toby’. He is often seen in the basement area creeping through the shadows. There are cold spots and visitors often feel uncomfortable and claim to hear voices whispering in their ears!

The second floor also has  spirit connected with it. This one is said to be the ghost of James Stark. The shooting of James Stark by town physician Philip Minas is a famous one and depending on who you ask he died right there on the stairs or in the kitchen.

Either way, his spirit is frequently seen on the second floor.

Other hotspots include the women’s rest room in the dining area where female customers often find themselves unable to leave the cubicle because of an unseen force holding the door closed.

Female diners have also claimed to have had their legs touched by unseen hands while eating. The upper floors are said to be the domain of a Lady in White who pushes people down the stairs.

Construction crews have also been chased out of the building by unseen forces. The building is so haunted that they even offer ghost tours from time to time.

The very first hospital in Georgia was the Candler Hospital, built in Savannah back in 1804. One of the most well known ghost stories in Savannah relates to the giant ‘Candler Oak’ that sits on the property.

It is also known as ‘The Hanging Tree’ and many people have reported seeing apparitions hanging by their necks from the branches.

However, in terms of being one of the most haunted places in Georgia, well that honour goes not to the hanging tree, but to the old morgue tunnel that runs all the way from Candler Hospital to Forsyth Park.

Back in the day, this tunnel would have been used to transport, store and discreetly dispose of bodies during the yellow fever epidemics. It is really no wonder that the tunnel is now believed to be haunted.

Those brave enough to go down there have come back with a wide variety of creepy tales including strange orbs of light and many different apparitions appearing all along the length of the tunnel.

One of the most popular haunted locations in Georgia is The Pirate’s House in Savannah. The inn here was opened in 1753 and even back then it had a dark reputation for Shanghaiing unsuspecting sailors.

Lured by the promise of a hot meal, free flowing booze and a place to rest the men would come into the inn, but when they passed out they would be dragged down into the basement and into hidden tunnels that led to the Savannah River.

When the sailors woke up the next morning they would find themselves on a ship miles from home where they were forced into service. It is said that visitors to the building can still hear moaning and disembodied voices coming from the now boarded up tunnel.

There have also been reports of apparitions in the upstairs room which now serves as a restaurant.

Berry College is allegedly the site of a large variety of paranormal activity. One of the most widely known stories concerns CCC Road.

It is said that when you cross the bridge in one direction you are able to count up to seven, but on the way back you will only count six – nobody really knows why, but it certainly is odd!

There is also an old cemetery on the road where people claim to have heard organ music, disembodied crying and strange footsteps as well.

The road running between the old part of campus and the new one is also where a girl was run over by her boyfriend’s car. It is said that when called upon, the girl is said to appear as a glowing green light.

Other strange occurrences at Berry College include strange music, crying and footsteps coming from the empty church  and a strange uneasy feeling in the tower between the East and West dorms.

There are also reports of students being followed by a man near the watermill, but when they look back at him he glares at them and then vanishes!

The Masquerade Nightclub is now a popular live music venue, but the building originally housed the Dupre Excelsior Mill which is believed to have been built some time in the 1880s and closed down in 1977.

It soon reopened as a pizzeria for a short time before being transformed into the nightclub that it is today.

Over the years, The Masquerade Nightclub has earned something of a reputation for being among the most haunted places in Georgia thanks to the large number of ghostly tales linked to the place.

One of the most common stories is of a large, tall black man who is seen wandering around the club. Staff say that he is the spirit responsible for turning off the music amps most nights!

Staff also report hearing phantom footsteps and feeling cold spots all over the building. There have also been reports of horrifying disembodied screams coming from the back stairs which are believed to be from a young woman who died in an accident at the nightclub.

The club is also said to be a hunting ground for vampires!

The Marshall House Hotel is an authentic nineteenth-century hotel in the heart of Savannah’s historic district. It is known for offering luxury accommodation, but also for being one of the most haunted places in Georgia.

Guests have frequently reported seeing a young man holding his own severed arm and searching for someone who can help him to reattach it! There are also reports of men in civil war style clothing who wander the hotel.

Some guests assumed they were actors for some kind of re-enactment or other event, and were surprised to learn that no such event was taking place! During the civil war, the building was used as a makeshift hospital to treat hundreds of wounded soldiers, many of whom would have died on the premises.

This goes some way towards explaining the origins of these apparitions. It is also common for guests staying at the hotel to wake up with one arm outstretched as though a nurse is taking their pulse!

Aside form the apparitions and experiences listed above, it is also common to hear tapping, for taps to turn on by themselves, door knobs to rattle for no reason and to hear children playing and running around as well as a few other unexplained things!

Other Haunted Hotels in Georgia 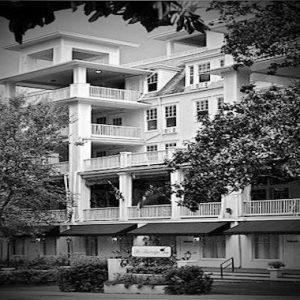 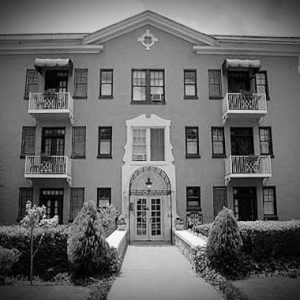 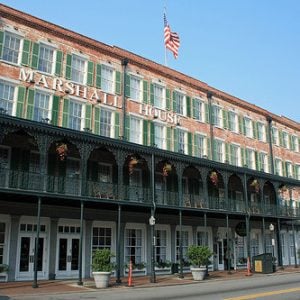 View All Haunted Hotels in Georgia