There are several things that Ohio is known for – it is the 7th most populated state, it has the 7th largest economy in the US, it is a key state in presidential elections and has a plethora of very well respected libraries and universities.

However, it is also well known for a large number of haunted locations that are to be found in the Buckeye state!

Now, let’s explore some of the most haunted places to visit in Ohio:

Fudge Road is a narrow gravel track which winds its way through the most rural part of Preble County. At one point a steel bridge carries the road across Aukerman Creek…

It is said that a young mother through her unwanted newborn off of the bridge, or in some versions of the tale the baby was stillborn and the mother hung herself from the bridge.

Whatever version is more accurate, the fact remains that today, motorists crossing over Fudge Road Bridge can hear an infant crying if they park at the bridge and say ‘mama’ three times.

Another tale linked to the creepy bridge states that a mysterious beast lurks in the nearby woods and takes shelter under the bridge, growling at passing motorists!

Sometime in the early 1800s, pioneer John Wrench engaged the services of the three Staley Brothers to build a flour mill. The finished structure was to become the first double wheeled mill in Ohio.

Business was great and after several years, Wrench had made enough money to retire and ended up selling his mill to Elias Staley. The mill was then passed down to his brother Andrew and continued to produce flour until 1905.

Today, the mill is still standing and Staley Road, named for the brothers winds its way past and through the woods. It has become something of a right of passage for local teens to drive this road at night as a demonstration of their courage.

It has been said that ‘Old Man Staley’ went on a murderous rampage and is now haunting the road. Motorists say that they often experience unexplained car trouble and some have seen Staley’s ghost standing next to or even lying in the road!

Since the Majestic Theatre was built back in 1852 it has earned itself a reputation as one of the most haunted locations that Ohio has to offer. It was originally the Masonic Opera House and during the 1918 influenza epidemic, the overflow of corpses was stored there.

It is said that blood and vital fluids from the bodies was pumped into the alley to the rear of the building earning it the nickname ‘Blood Alley’. There are lots of spooky tales that have been told about the various ghosts that haunt the theatre.

The most commonly sighted ghost has been named Elizabeth and is said to be a young woman. On one occasion she was recorded in the theatre asking ‘how do I get out of here?’

There are also plenty of shadow figures and strange mists seen in the auditorium and the Knight’ Room up on the second floor is a popular place to capture photographs with strange orbs of light in them.

If you visit Woodlawn Cemetery in Dayton, Ohio by day then the word that you would probably choose to describe it would be picturesque’. The burial ground doubles up as an arboretum and it boasts a wonderful selection of trees shading the pathways that meander around Lake Goose.

However, by night Woodlawn Cemetery takes on a much creepier feel. Many witnesses have reported a female spirit who is usually described as wearing a red shirt and jeans, with a blue sweater around her wait. She is said to wander forlornly through the trees.

Other spirits that are seen here include a young boy and his dog. They are said to have drowned in the canal after the boy fell in and his dog attempted to rescue him.

Many people are so touched by the tale that they leave trinkets at his memorial and some say they have heard the boy sobbing and his dog whining!

Mudhouse Mansion, or ‘the Hartman Place’ as it is known locally, is an abandoned brick mansion built in the mid-1800s. It has long been believed that the house holds some very sinister secrets. This belief is fuelled by the fact that the current owner is highly protective of the property and aggressively presses charges against any trespassers.

Locals have taken this as confirmation that there is indeed something to hide! According to legend, the original owner was a cruel master to his servants and kept them in foul conditions in the building’s basement.

However, one night the servants escaped and murdered the family in their beds.

Another owner is said to have murdered his wife before committing suicide because she was having an affair. Yet another tale suggests that it was, in fact, the wife who murdered her own children.

There is no telling which of these tales is accurate, but there are certainly multiple restless spirits walking the halls of this abandoned mansion!

The Civic Theatre, or Loews Theatre as it was once known, was designed by a Viennese architect named John Eberson. One of its most famous features is that it the ceiling can rotate and it is designed to look like the night sky.

One of the ghosts is believed to be the spirit of a young woman who committed suicide by jumping into the canal behind the theatre. She has been seen standing at the edge weeping.

Another of the resident ghosts is the spirit of a janitor named Fred who was a long time employee of the theatre. He is said to attack anyone who makes a mess in his bathrooms!

Finally, the third spirit is a male entity who sits in the balcony. Nobody knows who he is, but he is clearly distinguishable from Fred thanks to the fact that he is always so well dressed.

Sedamsville Rectory is one of the most notorious haunted locations in Ohio. It is over 100 years old and originally housed local priests from the Cincinnati area.

Somewhere along the way it apparently became the place where ‘bad’ priests were placed. There are rumors of child abuse and dog fighting connected to the property.

In 2011, a couple purchased the property and began a restoration project only to discover that the building had some otherworldly guests including a demonic spirit who has affected them both profoundly.

The property has been exorcized on occasion, but with no effect! It is now a popular spot for paranormal investigations.

The Lafayette Hotel was actually built on the ruins of another hotel – the Bellevue, which burned down in 1916. The Lafayette opened in 1918 and was managed by a man named Reno G Hoag. He died in 1944 and passed the job down to his son S. Durward Hoag.

It wasn’t until Durward passed on that the paranormal activity at the hotel began leading many to surmise that it is his ghost that haunts the third floor of the property.

Lights flicker and bulbs shatter on their own! The elevator behaves strangely and will often travel up to the roof on its own.

As well as the ghost of Durward, guests have noted a female apparition in Edwardian attire sitting in the Riverview Lounge. 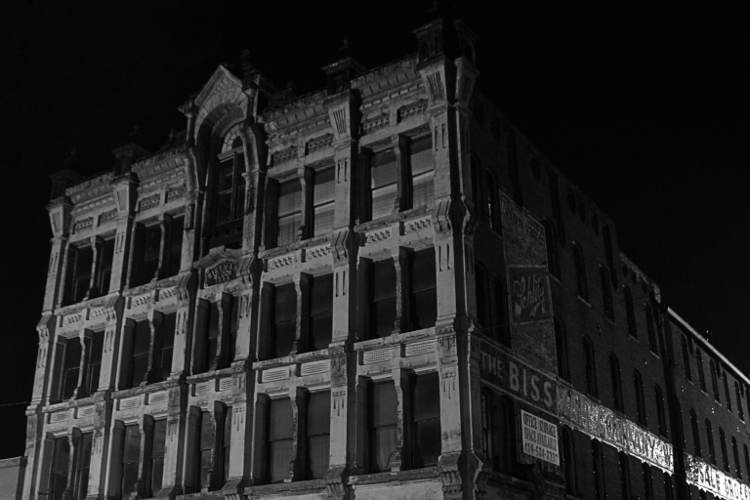 Built in 1886, by the same architect that designed the Ohio State Reformatory, it’s of little wonder that its eerie facade bears such a striking resemblance.

It doesn’t just share its physical appearance with the reformatory, but it also shares a film appearance too. Shawshank Redemption, perhaps one of the greatest movies of all time used this as a filming location too. If you have seen the film, the building is used as the entrance to the Brewer Hotel, where Brooks and Red stayed after they were paroled from Shawshank.

Not only has it made appearances in film, but it has also been the focus of numerous paranormal TV shows, including Ghost Asylum, and Ghost Hunter / TAPS to name but a couple.

The reports of paranormal here are rife, with a common feeling of dread and sadness particularly on the third floor. Many people report an overwhelming sensation of darkness when on this floor. Disembodied footsteps, voices, being poked and pushed, black shadows, and dark figures caught in images are some of the more common occurrences. On past investigations here investigators have received audible responses to their questions. One particular piece of audio evidence was when an investigator asked if they could speak to Ruthie, and a voice was caught saying “Is Ruthie here”.

In addition, people have witnessed the spirit of a woman throughout the upper floors, people in Victoria clothing, and sounds of people working.

The most violent patients were housed at the outermost tip of each wing. By the start of the 1900s, the asylum had become dangerously overcrowded and rumors of inhumane treatment at the hands of overworked staff were building.

However, the asylum lasted longer than many from the same time, it was not officially closed until 1993. Some parts of the building are still in use, while other areas lie abandoned.

One of the most chilling sights is the outline of a body which remains where Margaret Schilling died in 1979. She apparently got lost in the disused part of the hospital in winter of 1978/79 and was not found for more than a month.

When the corpse was eventually removed it left a stain that could never be washed away. She is one of the many ghosts who is said to walk the asylum at night.

There is also a cemetery on the grounds which holds over 2000 bodies and is said to have several spirits of its own!

Ohio State Reformatory served as a Reformatory for young offenders starting in 1886 before becoming an adult prison which remained in operation until December 1990. During its operation, it was home to some violent prisoners indeed!

One of the most brutal punishments used at the prison was to throw the inmate in ‘the hole’, a dark and claustrophobic solitary confinement cell.

The prison is now regarded by many as the most haunted building in Ohio with a wide variety of paranormal activity including apparitions, unexplained noises and a malevolent presence in the hole. It’s very high on the list of haunted prisons in the country too!

View All Haunted Hotels in Ohio

Other Articles on Ohio’s Haunted Places: