The Most Haunted Museum in East Texas!

It has garnered a lot of attention in the paranormal community in Texas, with many groups drawn to the many paranormal reports that have been experienced by both workers, and visitors, and of course the paranormal groups that have gone before.

Join us as we set off on a full night’s investigation at this truly historic and imposing building!

You’ll learn the history, learn the techniques we use, get detailed info on the ghosts that haunt here, and you’ll have a great time investigating with us in this huge and very haunted location!

Bring a small flashlight with you, as we’ll be walking around with the lights off most of the time.

The Museum for East Texas Culture is a museum in Reagan Park in Palestine, Texas.

In the early 1900s, voters in Palestine passed a $100,000 bond issue for a new high school and selected the newly formed 22-acre Reagan Park for the campus. Fort Worth architects Sanguinet and Staats designed the Tudor-Gothic style, elaborate brick building, two stories tall, positioned on a raised basement. There were originally eight lecture rooms, a library, a gymnasium, laboratories, and an auditorium.

The school opened in 1916, and the first graduating class in 1917 had 38 students. The first faculty consisted of one principal and ten teachers.

The building was to be demolished because of its condition but was saved by a group of dedicated citizens who did not want to lose such a historical part of the city. The building was renovated and turned into a museum, which opened its doors in 1982 for the first weekend of the Dogwood Trails Celebration.

The marvelous old high school is now the depository for the historical treasures of Palestine and Anderson County.

Ghosts of the Museum

A museum worker working on an exhibit one day thought the director walked in behind him and started talking to him about the exhibit, but he wasn’t getting answers to his questions, so he turned around and nothing was there. He believed it was the spirit of a young boy named Johnny whose apparition has been seen by a little girl. He was apparently dressed in early 1900’s clothing.

Workers have also experienced items going missing, on one occasion two people were changing the light bulbs in one of the upstairs exhibits when a light bulb simply vanished into thin air! Could it be the spirit of Johnny, being mischevious as kids do?

With many historical artifacts could it mean the entities are attached to these items? Possibly, what’s for sure this building is very old, and there is history on the grounds too. The school was in operation from 1916-1976, and it’s believed that there was a plantation here before the school was built.

The apparition of the Grey lady has been seen walking the hallways and standing in doorways on the ground floor. Her apparition has been seen on many occasions around the Indian artifact room.

The ghost of one of Palestine’s most interesting people, Osjeta Briggs is believed to haunt the museum after a paranormal team captured her apparition on a photo with her hair grown long, which she did during the latter years of her life.

The spirit of an Indian girl has also been captured in a photograph. Could this also be connected to the Indian artifacts here?

In the auditorium, the conversation of a mother and her child has been captured. The mother can be heard saying “be quiet”. Later, a child’s voice says he hears a train.

In the boiler room, an EVP was captured of a person saying “slap her” and later, “I’m scared”. Upon leaving the boiler room the paranormal team caught an EVP that said, “wait, don’t leave yet”. 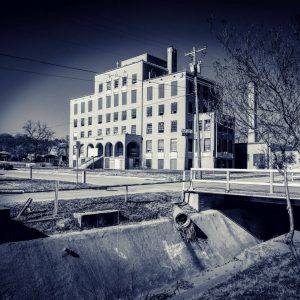 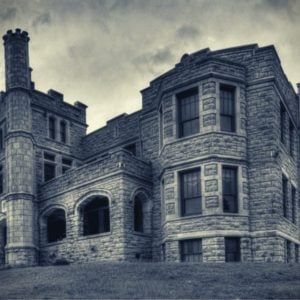