The world-class Omni Shoreham Hotel in Washington D.C. has been the temporary residence of some of the most powerful people in the world. It is a true landmark of Washington, a luxury hotel which offers the best not only to the living but also the long dead.

Built in the 1930s, the Omni Shoreham Hotel has a long history. Being an old hotel, the Omni Shoreham has not escaped stories about the supernatural. Henry L. Doherty, one of the hotel’s financial partners, and his entire family moved into the hotel into what is now Suite 870. They moved in the hotel with their maid, Juliette Brown.  One night Juliette awoke at 4:00am feeling very ill and called the hotel desk in a panic. She died before she could speak with anyone. It was also not long after when Mr. Doherty’s wife & daughter died too. After this unfortunate string of events, the Mr. Doherty moved out of the hotel. The apartment was then unoccupied for over 50 years.

The Doherty’s apartment was then renovated into a hotel suite. However, since the apartment was reopened, staff and guests soon reported hearing faint voices and witnessed doors closing and opening by themselves.  Televisions, as well as lights would also turn off and on by themselves, strangely all around 4:00am, the same time it’s believed Juliette passed away. Some occupants also said that they came back to the room with the furniture re-arranged.

Another report is that of loud noises coming from the room from guests next door when the suite was empty. Other occurrences include maid carts moving around on their own, a breeze suddenly rushing past guests in the room, and just a general eerie feeling when staying in the room.

The room has since been called “The Ghost Suite.”  One of the managers of the hotel who stayed in the suite also witnessed the lights in the walk-in closet turning on and off by themselves.

The Omni Shoreham Hotel was built in 1930 by the owner of a construction company, Harry Bralove. Waddy Butler Wood designed the hotel. One of the hotel’s major financial partners was Henry L. Doherty who later lived in the hotel with his family but left soon after his daughter died in what is now know as the “Ghost Suite”. President Franklin D. Roosevelt held his first inaugural ball at the hotel. The hotel was outfitted with an elevator and a lamp to allow the President to move freely and easily. The Shoreham has hosted various inaugural balls since then.

Guests who have disabilities are also well catered for at the hotel. ADA rooms have larger door openings and offer visual notification for the phone and the alarm system. Robert’s Restaurant is the hotels award-winning restaurant which offers a unique dining experience by cooking the freshest local ingredients available. Reservations must be made to be able to eat in the restaurant. The hotel also hosts special events such as weddings, parties and meetings. Brides and grooms will be able to choose from an extensive list of wedding packages.

There are lots of things to discover in Washington DC. The Arlington National Cemetery is near the hotel and it is the final resting place of war veterans. It has rows and rows of white gravestones. The Tomb of the Unknown Soldier is where people can see the changing of the guards are intervals throughout the day. The Washington Opera and National Symphony Orchestra plays wonderful music at The Kennedy Center for the Performing Arts.

At the Kenilworth Aquatic Gardens, one will be able to enjoy the beauty of blooming flowers. There are thousands of water plants and flowers and one would be able to see them all for free. The National Arboretum has more than 400 acres of plants, trees, shrubs and more. At the Ford’s Theatre, the place where President Abraham Lincoln was assassinated, guests will be able to relive the past with museums and artifacts. Guests will also be able to learn more about the President’s death. 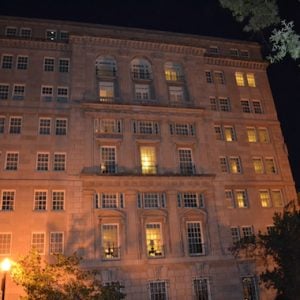