The haunted railroad tracks in San Antonio explained! Read on to learn the stories and theories surrounding the legendary San Antonio ghost track, as well as the location and what to do when you’re there.

San Antonio is home to many tourist attractions, specifically the paranormal, as they rank one of the world’s 10 most haunted cities by National Geographic. Perhaps the most paranormal site in the area is along Shane Road, at an intersection in the road, at the railroad crossing.

The tracks follow the San Antonio River which also passes larger landmarks such as the Stinson Municipal Airport and the San Juan Mission. What makes the intersection off of Shane Road so special, is the forever mysterious urban legend behind it.

As with most unconfirmed legends, locals all state different stories. The most spoken version, amongst paranormal investigators and handed-down campfire tales, describes a school bus stalling in the middle of the tracks in the general 1930s-1940s.

The oncoming train was unsuccessful in stopping before smashing into the bus, still holding the school children and the driver and ultimately killing them all upon impact. It is said the sheer force from the train split the bus in two, sending it in opposite directions.

In another version, the children were asleep on the way home from a field trip when their bus stalled on the tracks. The driver hoped the engine would turn over without waking any of the children. It was then he noticed the oncoming train approaching and franticly attempted to wake the children to get them off the bus.

Unfortunately, this version of the legend ends the same as the last, with all children and the driver still being killed in the collision.

A different and alternate widespread version states that the bus actually carried ten Sunday school children and their nun drove them. A couple variations describe how the bus was hit but all result with every child dying and the nun miraculously surviving.

Having been the driver of the van, she was completely overtaken by guilt and could only think to kill herself in the same manner that she believed she killed the children. She waited in her car at the same intersection her bus was hit, but as the oncoming train was coming, something pushed her car forward. The nun would later notice ten sets of handprints on the back of her car.

She was convinced her Sunday school students had saved her from killing herself that day. The legend goes on to say she then founded a school that would teach orphans, this becoming her life’s work, where she taught until her natural death. This legend remains unconfirmed historically, as no bus crashes involving a train collision were ever reported in that exact area.

In Salt Lake City there was a similar incident that was heavily reported on, especially in San Antonio, which has led some theorists to suggest the legend traveled and manifested into its own legend.

The Salt Lake City bus crash was around the same time frame, 1938, where 23 school children and the driver were all killed in the collision. 15 children survived but required extensive medical treatment.

Another similar incident in New Braunfels, a neighboring city of San Antonio, involved an entire family lost to a train unable to stop after their Model T stalled in the middle of the tracks.

The accident occurred on Easter in 1920, slightly before the legend’s timeframe. What makes the accident of relevance to the paranormal activity in San Antonio, were the daughters, son-in-law, and a small child that were all killed.

According to reports, the train was unable to slow quickly causing the car to be dragged upon the tracks for quite some time. Articles say the car was completely destroyed by the time the train could stop.

Some investigators and reporters believe they haunt the wrong intersection by mistake.

Protectors of The Track

Despite what began the legend, the paranormal activity surrounding the intersection of Shane Road and the train tracks seem to suggest spirits may still be unrest there. According to legend, and many visitors, paranormal experiences surrounding the tracks can be attributed to young spirits “protecting” them. Witnesses claim if one sets their car before or on the tracks, it will be moved over to safety.

After the car is moved, baby powder is thrown on the back of the car where small handprints can be seen. It is implied the children that died on the school bus push visitors over the tracks in an attempt to keep them from a fate similar to their own.

Skeptics have relentlessly tried to bring practicality to this event. One of their best claims states there is a slight decline that can roll your car to the other side of the tracks. While gravity can always play a factor, many people have taken cars ranging in weight that limits gravity’s opportunity to pull those cars. It also would not explain certain witnesses claiming their car moving in park, as opposed to neutral as suggested. 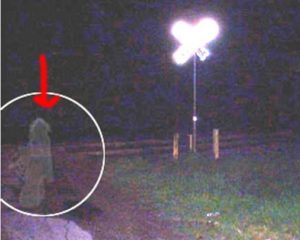 Visitors of the San Antonio haunted railroad track less often report hearing voices, seeing someone watching in the distance, there is even an incident of a young woman taking a picture that captures an apparition. The supposed photo shows a figure near the tracks at the intersection.

She claimed not to have seen the figure for herself until she sent the pictures from her visit to her mother, who said it looked just like a young female child clutching onto her teddy bear. The woman who took the photo reviewed the image and agreed, however, visual sightings at the tracks are few and far between.

One of the creepier paranormal accounts of the ghostly children involves a middle-aged woman finding a young girl standing near the tracks. The woman offered to take the girl home and the girl hesitantly gave directions to a neighborhood behind a park nearby.

When they arrived at the girl’s house, the girl adopted a nervous demeanor and refused to get out of the car. The woman decided she would go in and speak with the parents first, as she assumed the girl was a runaway.

She left her car and began to walk towards the house, but when she turned around to see the girl again, she had vanished. The woman hustled back to her car, opened the door, to find the passenger seat belt still buckled.

Some say this incident happened on Cindy Sue Way, then hinting that Cindy Sue herself was one of the ghost children, and she finally wanted to go home. Other streets in the neighborhood have child-like names such as Bobbie Allen, leading some to believe the streets were named in remembrance of the children who lost their lives at the train intersection nearby. There have been no other similar incidents of ghost children attempting to return to their homes from the tracks, perhaps they choose to stay not at rest, to protect the living.

While no one can be certain what exactly causes the paranormal activity at the Shane Road intersection, it has become notorious as one of Texas’s most haunted locations. The spirits there are seemingly friendly and only want to protect the safety of other travelers on the road. If you decide to visit the haunted tracks, be aware of the criminal activity that has been attracted to the site. Aspiring paranormal investigators have reported when they get out of their car to check for handprints, they become victims of robbery, car theft, and more. These incidents are more likely to happen after dark and with fewer passengers in the car. While the ghost children may save you from an oncoming train, keep your own eyes open for mortal evil!

You can search in maps for “Haunted Train Track San Antonio” and it will bring up the location and directions from there, or the exact ghost tracks address you can enter is 2902 Shane Rd, San Antonio, TX 78223.