Combine a mental institute with a sprawling cemetery holding thousands of those who have died at the hospital over the years, and you have a place that nightmares are made of. Welcome to the Austin State Hospital!

As spine-tingling locales go, old mental institutions will always hold a special place in the hearts of the fearful for their associations with madness and despair. Though time has taught us that the patients have more to fear from the hospital than we do of them, that doesn’t change the dreadful associations that commonly get brought up with these necessary institutions. Combine a mental institute with a sprawling cemetery holding thousands of those who have died at the hospital over the years, and you have a place that nightmares are made of.

Welcome to the Austin State Hospital.

In 1856, the Texas governor signed a bill authorizing funds for the establishment of the Texas State Lunatic Asylum. This was to be the first facility of its sort west of the Mississippi and was always intended to be top of the line for such purposes.

Construction on the facility began in 1857, and by 1861 it was ready to receive its first round of patients. The original building can still be seen to this day, now housing administrative staff, making it the third oldest standing public building in all of Texas.

The building was born out of the 19th-century Asylum movement in the US and Europe in an attempt to emulate the belief that people diagnosed with mental illnesses could regain their sanity in a sanitized environment free from everyday stresses.

The Texas State Lunatic Asylum took the design for its program from the innovative practices of Dr. Thomas Kirkbride in Philadelphia, emphasizing new and progressive (for the time) therapeutic techniques like behavior modification, an unrestrictive environment and drug therapy.

The hospital strove to provide a healthy diet, exercise, fresh air and rest for its patients, in addition to a pleasant but firm approach to misbehavior. Though it, like many other asylums of the period, may not have always held to these lofty ambitions for patient care, it was still a vast improvement over the primitive techniques of the past that attempted to drive literal demons from the patients.

It was hoped that the hospital would stand as an icon of tolerance and hope.

The original three-story building offered sturdy walls that protected from the often oppressive Texas summer heat. Every patient was given an above-ground room with at least one window, while noisy and quiet patients were kept separated to not cause unnecessary distress for any of them.

As the asylum grew in population to more than 700 patients by the late 1890s, more wings were added, allowing for true diversification of the asylum’s capabilities and for it to evolve into a self-sustaining village. It had wells, a dairy, an ice factory, gardens, and a facility where Texans could get rabies shots.

The beautiful, park-like atmosphere of the grounds attracted many local residents to enjoy picnics under the trees or by their many lily ponds. Adults could take carriage rides while paddle boats were made available to children.

While the beautiful grounds were an attraction for many locals, there was one location they would have liked not to know about: the cemetery. When patients died over the years, if they were not claimed by family or moved to separate facilities, they were buried on hospital grounds.

It didn’t take long for room to run out, however, and so a new cemetery was constructed on a plot of land two miles away. Although the bodies of the deceased were supposedly all exhumed and brought to the new plot of land, there are more than a few who say that many of the bodies remain buried underfoot to this day.

Though the hospital’s facilities were beautiful, they were not immune to the ravages of time. So many employees of the hospital either fell ill or simply ran off during the 1918 Spanish Influenza outbreak that patients were forced to run the wards.

By 1925 the facility had been renamed Austin State Hospital in an effort to engage with modern sensibilities for the subject of the mentally ill.

Newer therapeutic techniques like music, recreational and art therapies were introduced, as well as modern medical procedures like drugs, hydrotherapy, electroconvulsive therapy and the rare lobotomy. Medical artifacts from this period can still be seen on display today at the hospital’s administration building.

As the years went by, the hospital was forced to change with the times. World War II created a shortage of both staff and supplies. Integration of the hospital started in 1958, and with the Civil Rights Movement’s community care movement, many of the beds of Austin State Hospital and other institutions were cleared out.

While at its height of population in the 1960s the hospital held more than 3000 patients, today it acts as an acute care facility for a daily average population of 300 (though about 4,400 are treated a year).

With a focus of treatment on stabilizing acute psychiatric illnesses so individuals can return to the community, Austin State Hospital remains a Texas medical landmark to this day.

With a history of more than 150 years of service and an abandoned, dug-up cemetery onsite that may still have a few bodies remaining buried underground, the question remains: is Austin State Hospital haunted?

Though information on the subject is scarce, and its status as an active mental health care facility makes a professional investigation impossible, there are definitely quiet rumors and speculations to be found. Its imposing visage certainly feels haunted, but if you’re in the area, why not take a look and judge for yourself? 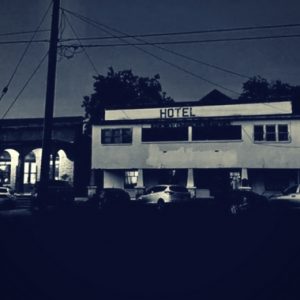